How Full Stack Developers can add more meaning to your MVP

Ever thought about hiring a FullStack developer for your MVP and ponder over to make a decision? It goes without dispute that hiring a full-stack developer in your team is very important for the success of your MVP. These days businesses do not think twice about investing in an MVP because they have realized the importance of having an MVP before launching the real product into the market. Through an MVP or Minimum Viable Product, it is possible to implement the most important and crucial features of your application to the users, and through the feedback garnered from them, the decision would be made on how to go about shaping the product.

Most companies hire professional full stack developers to develop their MVP, especially startups when they don’t have enough budget or time to experiment with a new concept. Once the MVP is accepted by the users, the companies can proceed with the full-fledged product knowing full well that it will be successful. Not only startups, medium sized companies and multinationals also rely on MVP to further their applications.

If you are an expert developer, you can develop your own, but it is always good to have a professional full-stack developer on the team.

What is Full Stack Development?

In full stack development, the developer has some major roles to play; the person acts as a frontend and backend developer, and creates databases to connect it completely. They even work with clients during the initial stages of the project planning.

The major advantage of hiring a full stack developer is that the company gets a developer who can master all the techniques involved in application development, the project itself moves faster, and the developer can quickly switch between front end and back end developer without any issues.

The programmer should be good at client-side development of the app, and so the focus will be on the User Interface, and to build a highly responsive, functional app. The languages used are CSS, Bootstrap, HTML and Javascript.

The Backend, also known as the Business Logic

The backend layer is the server side layer of the application, and backend languages like Python with Django, Ruby with Ruby on Rails, Node.js with Express.js and Java with Spring MCV and so on. It would be perfect if the developer has expertise in more than one server side language.

The Database is an important aspect of backend programming. Excellent knowledge of database is very important as the developer has to precisely develop and maintain the databases.

Does it help having a Full Stack Developer on your team?

Let’s check out how a Full Stack Developer adds value to your projects:-

1.Jack of all trades, but master of one

If you are planning to release a conventional app, then all you need to do is hire one or a couple of full stack developers, instead of hiring the project manager, front-end, back-end app developers, UI and UX designers and app testers as well.

2. The program gets the best design structure

3. They take responsibility of the project

Since front-end developers are responsible for the entire project, they will have complete knowledge of the how’s and why’s of the project. Any problem within the project, and they would be able to handle it easily. The clients can also contact the same, single person for more additions or tasks. This eliminates the  communication gap among team members.

There is no need to hire several people for one project because the full-stack developer can handle it all together. This eliminates the need for multiple hires. The same person maintaining and updating the website also makes it easier, and also when glitches are to be wrinkled out.

Since the developers are proficient in all three major areas of the project, they are full aware of the problems and can suggest solutions much faster than any developer in the team. They can easily suggest durable solutions that can enable the application or website to function perfectly.

Remember the following points while hiring:-

Depending on the project requirement, you can hire junior, middle or senior front end developers. For example if the requirement is to build a simple application or a landing page, juniors would be great, and they would know all the basics of HTML, CSS, Javascript, and at least once framework.  Middle front-end developers have more knowledge and experience than a junior, and more than one development framework. Unlike junior developers, they are fully capable of making independent development decisions. Their rate would be higher than that of a junior’s.

It is important to have strong interpersonal and communication skills because they often deal with the clients directly. Having UX training is an added advantage.

Regardless of the official title, the developer must have excellent problem-solving skills because they might have to solve a number of problems that crop up along the way, like fixing the bugs that crop up, making the frontend and backend codes work with each other and so on.

A frontend developer are masters in one or more than one backend technologies, design experience and client side experience. While working with an MVP, their depth of knowledge and their experience in functional aspects goes a long way in bringing out a successful product.

Most companies and entrepreneurs rely on full stack developers because they can easily release an MVP into the market without much investment.

Since algorithms play an important role in the development process, the full stack developer must be aware of the steps of using algorithms, have knowledge of all the procedures. 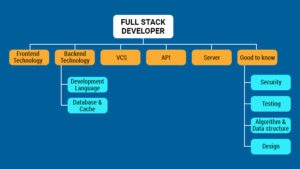 Git is one of the most famous distributed version control system that every developer is familiar with. With Git, developers can easily work on both small scale and large scale products, and make changes to all the codes, applications, documents, websites and applications, and practically every information related to software development.

The full stack developer must have a profile in GitHub, and the system allows you to track every modification made to the application codebase. Proficiency in Git allows the developers to collaborate and work with other fellow programmers on the same project. With Git, the developers will be able to enhance their productivity several times fold.

2. Knowledge of all major programming languages

The programmer must have excellent working knowledge of all the major programming languages, like PHP, Python, Ruby and Java, apart from other backend languages.

Apart from knowledge of frontend, backend and knowledge of programming languages, the programmer should possess fundamental design skills. What’s the point in building something that doesn’t look appealing or awesome to the users. So this is a skill that should be considered as priority.

There is no doubt about having a database for storing all the data in the web applications. The full stack developer should have knowledge of relational databases and databases storages completely and inside out. Knowledge of database management including the ability to design and manipulate database queries, combined with working knowledge of XML and JSON is an added advantage.

5. Knowledge of CSS and Javascript

Since CSS and Javascript are very significant in frontend development, the programmer should be quite adept at all the CSS and Javascript frameworks. This way they would be able to analyze the strengths and weaknesses of all the frameworks, and yet they do not have to write each functionality from the beginning.

Through version control, the developer can track and control all the changes in the source code, and they go to Git to track the changes, so they don’t have to tear the entire codebase apart to make the necessary changes.

Hiring a full stack developer would be the perfect solution when you need a tech expert who can work both on the frontend and backend of any application. They will have the skills and expertise to ensure every part of the system functions smoothly. The developer has to be creative enough to create physically pleasing websites and applications, test and debug and release a perfect product.

If there are riddles and puzzles in the project, they should be able to connect the dots and see the whole project, this allows you to smoothen out all the glitches and come out with a successful MVP much faster than you anticipated.