When to "use/not use" Flutter in Mobile App Development

Flutter is one of the most popular software development kit around. It is not very old, since the first release was in 2017, and with each version, there has been huge improvements. The latest version 2.5 was released on September 8, 2021.  If you have not yet created an application with Flutter, then you’ve probably used one made with it.

SDK is the short for Software Development Kit, and Flutter is the complete kit, meaning it comes with the rendering engine, testing, integration APIs, ready-made widgets, tools and framework. Thereby it contains all that you need to build cross-platform applications, including frameworks, libraries, documentation, APIs, etc.

So it is not a library or a framework, but rather a UI software development kit.

Flutter uses Dart, a client optimized, object oriented programming language released by Google. It is capable of compiling into native code directly, eliminating the need for an additional bridge to communicate with the platform. This speeds up start up time and improves overall app performance.

Dart is a good choice for beginners because it supports both strong and weak typing styles. And the other good thing about Dart is that it isn’t limited to mobile development, it is suitable for web apps as well. And it can also be used in combination with web frameworks too.

Another advantage with Flutter is its widgets. Widgets act like building blocks, and there are both readymade widgets and customized ones, for faster UI coding. These building blocks help developers whip up interesting user interfaces, and try varied approaches using different objects like layouts, views, controllers etc. Every object in Flutter is a widget, right a button to fonts, and you can customize this at any level. 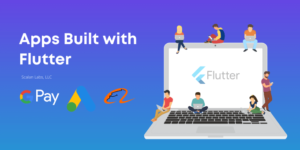 The Advantage of Flutter

Flutter has a number of advantages that makes it top-notch among other SDKs:

Flutter is obviously used for cross-platform app development, so you can develop both Android and iOS apps at the same time. This reduces the headache of developing two different applications at the same time.  There is only one codebase for both, so it is possible to develop simultaneously.  This makes it a perfect choice for small businesses and startups as they can launch their apps much faster.

All the developer has to do is press the key, ‘R’ on their keyboard, and the changes made would be incorporated very soon. With each version, the hot reload function has been improving and becoming faster. To make the code change visible, the developer will have to run the Dart code again. This function works by injecting source code into a running Dart VM (Virtual Machine).

Flutter framework automatically builds the widget tree once the VM updates the fields and functions. The Hot Reload function improves the designer-developer relationship because once the designer alerts the Flutter developer to make certain changes, and the developer makes them in real time, the designer will be able to see the changes and determine whether it is good enough.

3. Flutter is Easy to Learn

Flutter is a pretty straightforward language, and any beginner can easily catch up on the language, thanks to its easy documentation. Businesses can save money on development costs because just a single codebase is required for multiple operating systems. And the usage of Dart, only makes it easier. Being strongly typed and object oriented in nature, Dart ensures standardization and consistency, enabling developers to build feature rich apps.

Every app development company wants quick results, and every client wants a faster to market approach. Flutter does hit the nail on the head because it is super fast, thanks to the Hot Reload feature. It makes it easy to add new features, fix bugs and build UIs in the shortest time possible.

All developers worry about whether their applications would function on older devices, since users are using updated operating systems most of the time. With Flutter, there is no such worry because both the applications would work on older versions of both Android and iOS. This is a huge relief for all, as it saves time for developers, and promotes excellent UX, because User Experience is always the highest goal.

Flutter’s ready to use, easy widgets are always its biggest advantage. These widgets can be mixed to form complex layouts. Everything is a widget in Flutter, so that makes the development process easy.

One of earlier blog, we have detailed further about Flutter Advantages and detailed comparison with React Native, Xamarin, Kotlin and Ionic.

When Not to Use Flutter

All this sounds like Flutter is an interesting choice for developing cross-platform applications, there are some areas where you do not use it. Let’s examine where those could be:

1. When there is a Mismatch with Device and Platform

Certain platforms/OS may not support Flutter’s development features, even if developers can build Flutter apps for them technically. Certain apps may not support the functions of an Android TV because with Flutter, there is more action with the mouse and touchscreens, and in such cases, you will have to work from scratch with the control logic.

2. When there are Platform Limitations

3. Flutter is not Native

Skia, Flutter’s rendering engine only compiles to native code, but it doesnt use native buttons, scrollbars, tableviews, navigation elements, fields or toggles. The app made with Flutter only mimics native look and feel. Apple and Google updates their interface elements and behaviour with every new release. Apps that don’t comply to those update will lag behind.

4. Not So Good for Complex and Large apps

Flutter is more suitable for small and mid-level apps, but in certain cases, React Native is more suitable because the community support is superior there. Both are good for developing cross-platform frameworks, but often React Native is suitable. Hence, Flutter is perfect for small and mid-level startup businesses. If you are planning to develop a complex app, and for long-term use, then it is better to choose native development frameworks. Choosing Flutter may not be a good choice.

Flutter doesn’t support hardware devices connected over Bluetooth. So when you are developing apps for hardware devices, it is not recommended to use Flutter. There will be connectivity troubles and performance issues if you try to connect.

6. Debugging Can Be a Very Hard Thing

When everything works smoothly, Flutter can be the greatest thing around, but when something doesn’t work, you will have a hard time trying to figure out what and how. It could be the code, the third party interface code, the system itself – you will need to figure that out with debugging, and that could take up time.

Google is infamous for dropping technologies like hot potato if they don’t seem feasible. And there are other technologies that’s going to pose stiff competition for Flutter. Like Apple’s SwiftUI (however, it doesn’t allow the creation of Android apps, it lets developers use their creativity on a number of Apple platforms like iOS, iPadOS, macOS, watchOS and tvOS).

And Google promotes its own technologies like Jetpack Compose, for instance, and it lets developers build native applications.

For automating software development, you need access to third-party libraries and packages. These are not only open-source, but are also easily pre-tested and readily available. It is not difficult to find the much needed package for new older and popular technologies, but for new ones, this could become an issue. Even so, there is a lack of third-party libraries when compared to React Native.

9. Yes, Dart can be problematic too, hence it sometimes put Flutter at a disadvantage

Dart was supposed to be the strongest point for Flutter, since it is a great language and its paradigm familiar to many programmers. But many new developers do not have knowledge of Dart, and hence it would be difficult to find new people on your team.

So now that we have reviewed the areas where Flutter is at its strongest and places where it cannot be used, it is now clear where you can use the technology. Hopefully, you can now form your own opinion about it, and where you can use it. Flutter is definitely here to stay inside of competitors like React Native and Xamarin. Get in touch with experts to know you can make Flutter apps to promote your business.