How HL7 Solves the Interoperability Issues between Healthcare management applications

4. Examining the levels of healthcare interoperability

6. The two possibilities in HL7 integrations

7. Comparison of the two communication possibilities

The healthcare industry has come a long way. With every new innovation, the impact and influence has been tremendous. The entire industry keeps changing as you watch it, shaping the future of healthcare to incorporate the newest technologies, new treatment regimes and covering insurmountable risks.  With the rapid advances made in the field of healthcare and medicine, it is only wise that there could be a system where all the devices in use are connected seamlessly, with no room for error, and the purpose of the healthcare industry is served. Keeping track of these advances can be a tough call indeed, especially when there are a multitude of platforms involved and a myriad of devices too. This is where the term interoperability gets prominence.

Interoperability is the ability wherein multiple devices communicate with each other, exchange and make use of information. This feature procures phenomenal importance in the field of healthcare because the lives of many patients would be at stake if the exchange and use of information doesn’t happen on time. When the data comes in from multiple devices and multiple providers, especially when there are several healthcare systems, including diverse payment panels, the data exchange must be seamless.

Now, how is that done? Through an entity known as HL7, a non-profit organization responsible for developing common standards that allows for the seamless exchange of data. Interestingly, HL7 or Health Level Seven International is not a new concept at all.

HL7, as explained above, is an organisation that develops the rules and guidelines involving patient data exchange between health IT systems. This organisation was established in 1987 and accredited by the American National Standards. It includes all the major players of the healthcare industry – service providers, stakeholders, payers, etc. The whole process makes it easier for data to be exchanged as and when required, so every step of the data exchange is covered in detail.

Layer 7, also the application layer is the final layer in the communication model, developed for OSI or Open Systems Interconnection.

HL7 details the standards, language and data involving the communication between health IT systems. It is almost like a formula that tells how something should go. For example, if a service provider shared patient data with the clinician, the data exchange happens only when the formatted data is organized under predefined semantic standards. It is like some kind of communication is happening between them. In this manner, there are about a dozen standards pertaining to HL7.

Out of the 12 standards, here are some of the most popular ones:

Before getting down to examining how HL7 can work out interoperability for better service and patients, let’s have a quick run through of the different levels in healthcare interoperability.

Organizational interoperability is one of the highest levels, 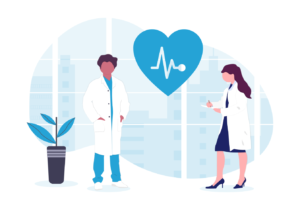 according to experts. This deals with the exchange of data between various organizations, especially when there are different requirements, goals and regulations involved. Once the consent and security is ensured, the integrated workflows.

This is another level of interoperability that’s really important because the data structure would be different depending on which device it’s coming from. All the data coming in from different systems could be interpreted and incorporated into the new system. It doesn’t matter what the format or source the image is coming from. With artificial intelligence, semantic interoperability can be really perfected.

This is the most basic level of interoperability. In this, the data will be securely transferred from one system/device to another. It could be in a different format or the same. For example, a nurse could look up the patient’s lab test results at the results portal, and manually enter the data into the EMR.

As the name suggests, in structural interoperability, the data coming from multiple devices and systems will be structured and standardized into the desired format. The data will be highly organized so the receiving system will know which data to enter in which field. With an important standard like HL7, structural interoperability can now reach great heights, be consistent and centralized.

As explained HL7 governs and dictates the structure, data types and language that devices need to communicate with each other. It works like a formula, and when done in the correct semantic standards, there is no chance of failure. A person might visit more than one ER, or may see more than one doctor for second or third opinions. With the help of standards like HL7, you can make the data available to everyone service provider who has access to them. With the correct data, positioned and organised methodically, healthcare providers ensure that the patients get the ideal treatment.

Some of the most commonly used HL7 standards:

There are dozens of HL7 standards in use today, but let’s examine a few of the main ones:

HL7 Ver 2 – This is one of the most commonly used messaging standards for exchanging clinical information and sharing patient data. Ver 2, also known as Pipehat is a database query language that helps standardise the messages.

FHIR – FHIR is short for Fast Health Interoperability Resources makes it faster and easier to develop interoperable applications. Developed by HL7, it is a draft that describes the data formats and elements and a modern application programming interface that deals with information exchange between systems. It doesn’t matter in what manner the information is stored. 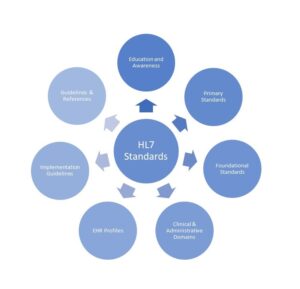 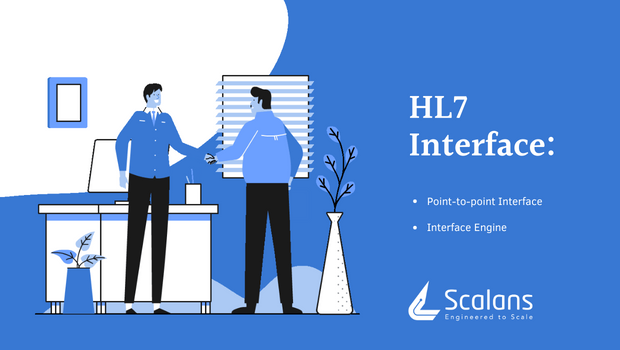 For HL7 integrations there are two possibilities. One of them is Point to Point integration (P2P) and the other is building an Interface Engine. Let’s examine what those are.

Point to Point integrations – This is where information is sent from one system to another with the help of custom links. The involved systems will communicate with each other, but independent of other applications. In the P2P communication protocol, there will be a set of specifications on how the sending organization and the receiving organization does the job of sending and receiving – on the type and format of data.

The sending party will build an interface as per these specifications, and for each new application, this will change. So sometimes, you have to build multiple interfaces to receive different kinds of information.

There will be a particular method for moving the data between the export end point and import endpoint. There will be a system for handling the queuing of messages, and also a format for logging the flow of messages.

The interface engine can be configured in 7 easy steps, and it doesn’t matter who configures the systems, because they can be easily done, and extended with open source components. The components are graphically configured, with their own configuration panels, so there is no need for programming knowledge.

Comparison of the Two Communication Possibilities

When you compare the two points of communication, the interface engine is easier to implement, and is less expensive too. In the P2P communication, it would cost money when you need to change or add new interfaces, especially when the vendor has to do it. Interface Engine, on the other hand, doesn’t have that probability because you can adapt the interface itself to accept different messages and data formats.

P2P communication becomes effective only when you work with interfaces that do not change quickly.

However, yes, both the technologies have their own pros and cons, their own complexities. And they need some amount of customization as well.

HL7 is thus the most widely recognised standard for communication between multiple devices and systems. Through HL7, the entire process is simplified to perfection, eliminating the need for custom interfaces.

With it, there is a seamless exchange of information between platform and data exchange between clinical and administrative applications, ensuring that patients get timely care, without jeopardizing security or private information.

Continued adoption of HL7 will make it easier for vendors to transfer electronic health information of patients and more and more healthcare providers are leveraging the innovating technologies to provide value to the healthcare community, by facilitating clinical workflows and standardizing them. So, are you looking to build a great new interface engine for HL7?