Failures are meant to teach us what’s wrong, and how it can be corrected.

But when mistakes are costly, it could affect the reputation of the brand, and sometimes its future. Releasing a new product into the market entails plenty of research: Identifying the need. Plunging into the market without doing proper make research is perhaps the biggest blunder of all

MVP or the making of a Minimum Viable Product is the answer to a lot of problems companies face today. MVPs are not just for startups anymore, a lot of big companies use them till date to ensure their product is well received in the market.

So if you are plunging into the market without testing your product idea, then you are in for a rude shock. This has happened before plenty of times, and it is likely to happen again too.

Electroloom is a 3D printer company that discovered a device that helped manufacture clothes. But their MVP was poorly developed, and looked more like a prototype. And the product targeted the wrong segment of the audience, so they couldn’t actually get through the people who might be interested in it. They failed to scale and ran out of funding.

Standout Jobs is another example investing in a project solely on guesswork without active research to back it. The creator of this project used up a lot of resources, but the project just didn’t take off. They didn’t even know how to create a strong MVP, eventually the company sold off to another company.

Here are some still going strong examples of successful MVPs.

Facebook – Started off as Thefacebook in 2004. The founder James Zuckerberg created a simple idea wherein Harvard and alumni can connect with one another. This went viral and the rest is history

Dropbox – Dropbox founders were intelligent enough to create video prototype of their product, share it as a simple demo to see how people would react to it. After collecting enough data, they implemented a few changes and released the software. It was a massive success overnight.

Spotify – The app started out as a basic landing page, and later used agile methodology to use a complex product cycle that was based as the original MVP.

And Foursquare, Airbnb and so on. There are so many companies that release their products the right way, and became hugely successful later on.

So whether you are a startup or not, releasing a new product or not, having an MVP is a must. It is always much better to have a well accepted product in the market than push a half-baked product out in the market, and then regret it.

So before going into the mistakes that companies make coming out with an MVP, it is important to have a quick look into the differences between a prototype and MVP. Many entrepreneurs make the mistake of thinking that both are one. So here you go:

We have already discussed more about MVP, and a roadmap to build an MVP. So once you are clear of the differences between MVP and prototype, then you can be aware of the common and often, costly mistakes.

Minimum Viable Product or MVP, introduced by Frank Robinson in 2001 and popularized by Eric Ries, is a product intended solely for user evaluation. It gives an idea about user feedback and a clear picture if you’ve had about the speculations on releasing the product. From the feedback collected from early adopters, it is possible to optimize the product for the perfect market fit.

Prototype, on the other hand, is a complete visual representation of the product. Hence it will include screens, wireframes, mockups and user flows. The main purpose for this is getting early feedback from users. Prototypes can be created when there are some aspects of the system that you don’t understand, and creating a prototype is the most feasible option. And it is usually developed before the minimum viable product. The fundamental difference between the two is that:

Here are the 7 mistakes to be avoided:

1.The idea that seemed unique is not so unique anymore

Would you share your new product idea with an acquaintance, and then worry stiff that the idea would be stolen and recreated in some other manner? Perhaps that is the reason why many startups are so discreet about sharing their idea, and then they fail miserably when they transform their idea into a full grown product.

It is okay to fall in love with your idea and be a strong believer of it. But what if it doesn’t have a market? The purpose of the product is to solve the pain points of the users. If the user doesn’t feel there is a problem in the first place, then how can you drive home the idea? You will end up with the following scenario – With a solution, but with no problem!

To avoid this scenario, a proper survey and market research would shed light into the pains real people have. This would help with your worthy and successful idea.

2. Not listing what the market has to say

Once the idea is tested, you will receive a lot of data on how the idea is perceived. Some people tend to ignore market reports because they love their idea so much, and they would be willing to go full ahead, and build the product. And in the end, they find themselves with a solution for a non-existent problem.

Watching the reports of market research can also benefit in another way – it might not only reveal the response to your idea, but you will have insights on other pain points too.

3. No compromises on core features

Yes, it is true that you shouldn’t load the MVP with too many features. Include only the most important and unique features in the app. Just because the product is minimally viable, shouldn’t make it half-baked and unfinished; make sure the product has quality features, so the focus is not on the number.

Priority features can centre the product’s vision and strategy, for whom it is being created and for whom. Look at the competition, assess the mistakes, their successes and that would help come up with better features that really matter.

As explained above MVP is different from a prototype, but you must have a prototype before you build an MVP. In fact, the prototype is the fastest way to iterate and gather your thoughts on the important features of the product before the MVP stage.

It helps all the members of the project to have a better concept of what the product is and what it aims to achieve. The stakeholders, the designers, the marketing and sales team can all start doing their respective jobs if the prototype is correctly prepared. 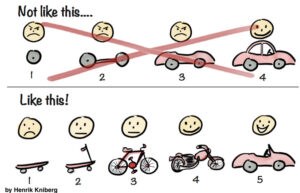 In the end, you might have to listen to the market reports and do a pivot. You might have to change some fundamental aspect of either the product or your business, or maybe the target segment even. Pivot is sometimes the better option if you don’t want to scrape the whole project.

Would you believe that YouTube was a near failure initially? The video streaming service initially started off as a video based dating service, but when they realized that the real value lay in turning the idea and changing it into something that we know today. Now YouTube is much wider and became a huge empire that we know today.

6. Perfecting the product and never happy about it

Remember, the MVP should have only the core features, so it doesn’t have to be perfect enough. The users just need to have an understanding of the product, and how it might improve their life. So that’s how it should be. There is no such thing as building a perfect MVP. On the other hand, while creating the MVP, remember it should be viable as well, so don’t be a minimalist

To prevent the developer team from over engineering the MVP, always stay in line with core functionalities of the product, and resort to actions that will provide more value in the future. If you over engineer the MVP, it could affect the time, budget and resources, and in the end a product with no value. It is not important to build the entire product from scratch, it is alright to use third party libraries and components to help speed up the development time. It is also important to alert the developers to create the right technical architecture, so inform them about the business aspect of the product as well.

An ideal MVP should take less than 3 months to build. If you are taking more time than that, then you are cramming it with too many features. And it is also very important not to wait around trying to perfect the MVP, rather the focus should be on the functionalities.

5
(18)
Are you looking for help with your next project?

Over a decade, we’ve assisted 250+ companies in delivering more than 350+projects. Contact us today at the Scalans office number or you may use online contact form.

I worked with Scalans on two major web app rebranding projects, both were highly customized. Both sites turned out great, they kept up to date and stayed on deadlines. I would recommend Scalans for anyone doing upgrade that has a clear path of what they want and need.
★★★★★